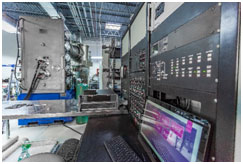 About Gunslinger Custom Paint: Located in Golden, Colorado, Gunslinger is the industry leader in paint manufacturing
and custom design. Established in 2003, Gunslinger began as a business concept in the back of the owner’s auto body
shops in Denver, Colo. As a Tier One supplier for one of the largest motorcycle manufacturers in the U.S., Gunslinger
understands the importance of meeting partners’ needs and exceeding expectations. It is not your typical paint shop.
They have witnessed first-hand the benefits experienced by partners through their processes and efficiency.

About Tribologix: Tribologix was established by Andras L. Korenyi-Both in 2005 to develop and support surface
engineering solutions to reduce friction and wear in extreme environments where conventional lubricants do not work.
The Tribologix team represents a successful collaboration of proven scientists and leaders from diverse technical and
business backgrounds. Tribologix has contracts with DOD – Air Force, Navy, DOE, NASA- JPL and commercial aerospace
and motorsport companies for friction and wear reducing technologies. Tribologix relocated to Golden back in August
2012 from Dayton Ohio.
www.tribologix.com.

Jeff Theisen – President, Gunslinger
Jeff is a 22 year veteran of the auto body industry. Jeff began his auto body career early and painted his first car at the
age of 14. Originally from St. Cloud Minnesota, Jeff moved to Colorado in 1998 and continued his line of work in the auto
body world. While working for a national auto body chain, Jeff quickly climbed the corporate ladder in his profession. He
has held a variety of positions within the industry and prides himself on his dedication to the trade. Jeff’s experience
ranges from estimator to general manger, from district manager to regional manager. As manager, he specialized in
increasing body shop growth through his operations and marketing efforts. In 2000, Jeff decided to become a business
owner and purchased Pearl Auto Body, located on 47th and Pearl Street in Boulder, Colo. Jeff had a goal of redefining
the experience of the repair process by completing a professional, quality repair in an appropriate amount of time. Jeff
went on to open five more Pearl Auto Body locations with his business partner, Dave Call. Jeff established Gunslinger
Custom Paint in 2003 as a business concept at the Pearl Auto Body Denver facility after being approached by Thunder
Mountain Custom Cycles of Loveland, Colo. to create a custom paint company for their custom motorcycle business.
Today, Jeff oversees the overall operations of Gunslinger with his counterpart and co-owner, Dave Call along with their
property management company they also own together.

Dave Call – President, Gunslinger
David Call has been in the auto body industry for more than 35 years. He began his career on the repair side of the auto
body business as a painter helper in January 1982. Dave’s career progressed quickly as he moved from an
estimator/production manager to general manager to district manager in 1998. Dave quickly transitioned from district
manger to market vice president for the state of Colorado for a national auto body chain. As market vice president, Dave
expanded the company to 13 locations in total with six of those being new locations within a 14-month period. Dave also
increased the company’s sales to a run rate of 36 million annual revenue in five years before departing from the
company in November 2004. Dave shifted his focus to entrepreneurship in 2004 when he purchased shares in Pearl Auto
Body and became a co-owner with Jeff Theisen. In 2009, Dave became a business partner in Gunslinger Customer Paint.
Together, Dave and Jeff have grown Pearl Auto Body from only three locations and 28 employees to six facilities with
more than 90 employees. Dave and Jeff sold Pearl Auto Body in 2012. At Gunslinger, Dave primarily oversees
production, materials, tooling and facility improvement. He is heavily involved with HR and the employee side of the
company.

Andras L. Korenyi Both – Former owner and current CTO, Tribologix
Korenyi-Both brings more than 30 years of extensive Aerospace, Industrial and R&D Coating, Tribology and Surface
Analysis experience to the team. From 2006 to 2007 he was a visiting scientist for The Air Force Research Lab in the
Tribology Branch of the Nonstructural Materials Division. Prior to founding Tribologix, he was an industrial physicist and
managing partner for PVT Plasma & Vacuum Technologies LLC. As managing partner, Korenyi-Both was directly
responsible for the design, manufacture and support of turnkey coating solutions for coating of components in the
manufacturing, aerospace and automotive industries and went on to serve as technical director of Dayton Coating
Technologies and United Coating Technologies. Korenyi-Both has successfully commercialized coatings that are now
used extensively in the aerospace and automotive industries. He worked as a coatings engineer for NASA, at the Glenn
Research Center (NGRC), Surface Science Branch, establishing extensive experience in tribological testing and surface
analysis. Prior to this work at NGRC, he worked as an associate scientist for the Quantex Corp., Maryland in the Thin
Film Division. Korenyi-Both has authored and co-authored 30 technical publications, co-authored a book in his field, and
has received numerous technical awards. He holds a bachelor’s degree in physics and a master’s in material science and
engineering. He is currently an affiliate research professor at the Colorado School of Mines, Metallurgical and Materials
Engineering Dept.